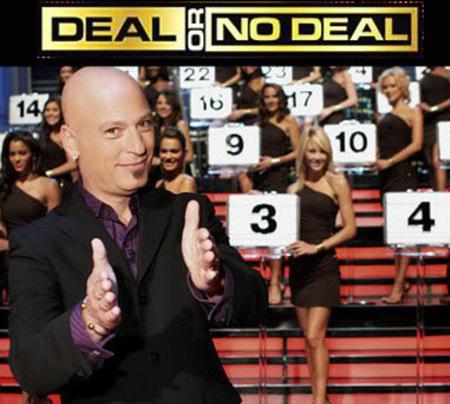 I run in quite a few different circles of show business here in the greater Southern California area, and this place is so big that it's easy fool yourself into believing that most of these circles never intersect. Recently, I encountered the rare triple convergence of scenes I never thought would have anything in common.

The last few years, I've been doing recording sessions with a group of guys at a studio in Calabasas. For a period of time a while back, it seemed that every time we went to lunch, we would encounter comedian Howie Mandel at the sandwich shop. A lot of the time he appeared to be holding court with a posse of people I assumed to be a production team of some sort, other times he would be alone, and to my eyes, kind of looking around to see if anyone was noticing him. I've since been informed that he's a bit of a germophobe, so perhaps he was just looking around to make sure nobody was going to get too close. At any rate, it became a bit of a running gag with as to whether Howie was going to be there at any given lunchtime. Quotes along the line of "My day isn't going to be complete unless we see Howie" and "Is that Howie?" became common. Then he got famous again with the game show "Deal or No Deal", and we stopped seeing him at the sandwich shop.

A few weeks ago I got a call to play on a Reality TV show at the Culver Studios. A game show that normally didn't have a live band suddenly wanted an 18 piece orchestra on short notice to play some Broadway style music for one of the contestants, who was a fan of the Great White Way. The name of the show - "Deal or No Deal"! I was dying! Wait 'till the guys in Calabasas hear that I worked with Howie, I thought with a grin. We were rehearsing for the show, when I spotted Megan Hilty, who plays Galinda in the production of WICKED here at the Pantages Theater in L.A. that I'm a part of. Turns out she was there to appear as Galinda and offer the contestant and alternate prize to the chance at the million dollar briefcase. (And shill the show in a classic case of vertical marketing by Universal - a major investor in WICKED, and the parent company of NBC - "Deal"'s network). A couple of others in the orchestra who also play in the pit at the Pantages were looking at me with that "We can't escape this show" look on our faces. Galinda was offering a pretty good deal - a WICKED VIP package worth about $12,000 (including an appearance onstage at the show in costume) plus another 50 grand on top of that. The contestant picked it, which was a good call as she would have lost the game on her next briefcase selection.

So there you have it, the triple convergence of seemingly unrelated aspects of show business here in L.A. The circles are far more connected than I imagined.....You can see this episode of "Deal" on December 11th.