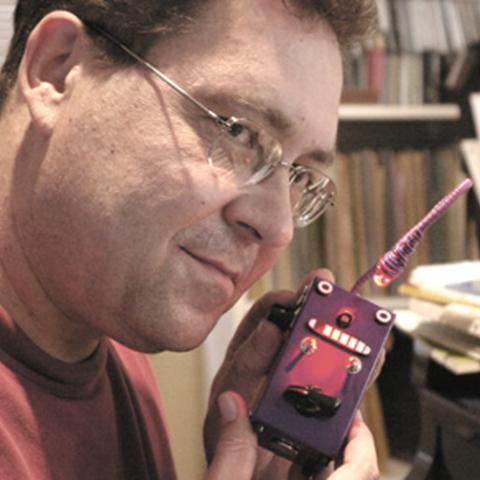 David Witham is a massively talented professional piano player who, in addition to having his own work released on the prestigious boutique Jazz label, Cryptogramophone, has played and recorded with musical luminaries including Nels Cline and Ernie Watts, in addition to serving for 15 years as musical director for George Benson's touring band. He's also worked in the orchestra pits of Wicked and The Lion King at the Pantages.

Sander: How did Portable Universe first get started?

David: In 1999 I was in a slow period of work and found, via my cable bill, that I can have my own television show for free via cable access, so I thought, 'What the heck.' I'll feature some people that I know that. fall through the cracks, exposure-wise, feature some music I'm involved with, and learn a little bit more about production, something I've always enjoyed.

I pulled in my buddy Matt Cohn, a creative fellow, and someone I've known since junior high school, to help and he came up with a lot of great stuff, including recurring characters, themes, and a lot of photo essays of things happening around Long Beach.

S: What do you mean by recurring characters?

D: For example, Neon Hunter was one: The nocturnal fellow who prowls the streets of L.A. looking for great neon signage in the Southland and beyond. That led to a series of small films we did covering over a thousand miles, and many different cities. A couple of these films actually were exhibited the Museum of Neon Art, and the Caretta Shiadome in Japan, as part of one of MONA's exhibitions there. Neon Hunter was a cultural liaison part of the street team.

When we did this, it was very much a sandbox, a creative playpen that we were just making up as we went along. A lot of times we had an idea of what to do, and many times we had no idea at all, when we went into the studio. So, it was a good way to hone your on-the-fly skills, to create scenarios. To throw some stuff up on the wall and see what sticks.

The show has been a good place to try all kinds of forms: Documentary, live performance, artist profiles, short films, photo essays, poetry, local color, comedy, abstraction. We even did a show where Greg Eicher built a picture frame, cooked turkey picatta, mixed a martini for it, and we consumed it while watching ourselves on green screen as if we were the entertainment for the meal! All in 30 minutes!

I'm very lucky to have some talented friends that were willing to come and play and get their stuff documented, like Mike Miller, a great guitarist. We also had Nels Cline, Norton Wisdom, Adwin David Brown, Richard Stekol, Phil Upchurch, g.e. stinson, Alex Cline, Alphonso Johnson, Luis Conte, Greg Leisz, Julie Christensen, Brad Dutz and many many others who really were very generous with their time and energy.

S: How many episodes did you produce during its original run?

S: In addition to producing the shows, how did you build an audience?

D: I'm not sure we ever did. It was kind of a running joke between Matt and I that any given time Portable Universe aired there were probably eight people watching cable access at that moment. I did what I could. I put videos on the Internet, at www.portableuniverse.tv for instant access and tried to point people to the website via the show. My hit counters didn't show a whole lot of action but, for me, the idea was to do the work of documentation and learning and building skills in a low pressure environment, and not worry too much about building an audience. It worked out for me. Not everything we did was golden, but we did capture lightning in a jar a few times.

We did get Theo Douglas to write a couple of articles for the Press Telegram about the Neon Hunter and Tiki Hunters projects. That was nice local coverage, to be sure, but I don't know if they attracted eyeballs to the show. There was no way to measure viewer numbers.

A lot of people bicycle their shows around the country to try and build an audience. I just didn't have the wherewithal to do that. I have a full- time job as a musician.

S: How did it feel when the public access system was gutted?

D: Well, it was an inside job by Fabian Nunez and the cable companies. The legislation was railroaded through with alarming swiftness to avoid any sort of organized opposition, so it felt bad. There was no reason that these cable companies couldn't afford to pay for public access, and it was a quick way for them to get off the hook for it. It was just sad not to be able to go to that little playpen once or twice a month and crank out some shows, have some fun, and try to be creative.

S: When it ended, did you consider trying to work in a more DIY way, without the support of the infrastructure you previously had access to?

D: I was kind of working in a DIY way the whole time. I would make segments in the field and edit at home and just bring in finished pieces to put on the three-quarter inch tape that we broadcasted on. After the studio closed, I actually made a couple of episodes that were just posted on the Internet. I did the Eclipse Quartet at the Museum of Neon Art, and started work on the Eric Johnson Maize project, but that didn't get finished until last year because I just deactivated for a few years and didn't do any video projects.

We were at an interesting point in broadcasting When I started Portable Universe. The idea that you were going to be able to watch TV or movies or anything else on the Internet, phone or tablet seemed a long way off. I was pushing it, but most people didn't have the bandwidth or equipment to actually do it. Now, we're at a point where anybody that's got wi-fi, a cable modem, or some kind of high-speed Internet access can enjoy the experience.

S: What was your involvement in the development of PADNET?

D: My involvement with PADNET it is strictly as a business member and producer of Portable Universe. Darick Simpson, the Long Beach Community Action Partnership and the PADNET team of Lisa Mastrimico, Bobbie Ferguson, and Paul Carroll have done all the legwork. Darick most importantly managing to get the city to cough back up the PEG [Public/Education/Government] money they'd been sitting on for four years.

S: How has the new facility, and the new model, caused you to re-imagine or reconsider your approach to the show?

D: I'm still producing at home and haven't been certified on new facility gear. I probably won't be until August, so I haven't really done that re-imagining yet. I have reconsidered the approach to the show - a little less "Wayne's World" now. It is a little more - I wouldn't say 'serious' - a little more polished presentation, perhaps.

They really built a nice facility there. It's pretty state-of-the-art, with full HD, Final Cut X facilities for editing, and people to teach you that stuff. It's really a fine studio. Combined with their website, which features easy uploading of content, live streaming, and on demand features, they're looking toward the future.

It's a little different than cable access used to be because it's more of a pay to play model. You have to join up and take some classes to get certified as a producer, and there's no crew on staff to assist with production, as there was in the old days. So, I have to build my crew, or do it alone, which I must say is way too stressful to do on a regular basis. Darren Gaber, my director from the LBCT days, is interested in coming on board and of course Matt Cohn is in as well, so we'll be working over there in the not too distant future.

S: With this new model, do you think that audience building will be easier, especially since the content, once broadcast, will be available for streaming via the internet?

D: All of that will help, plus they stream the broadcasts live, as well. It certainly widens the net, no pun intended, beyond Long Beach. And adds time shifting to any potential viewer's mix of options

S: What's in the works for new episodes?

D: I've spoken to Dave Alvin, who's interested in doing a show, and just started in on a piece about an antiquities dealer that I recently met. 'Wax and Wane' is a short documentary Matt an I started on the closing of the Movieland Wax Museum. I'd like to try and cover some of the music that's going on at Gatsby Books right now. Oral histories with the great arranger Bill Holman, and legendary woodwind session player Gene Cipriano, I've got a pretty legendary show from Club Tropical with g.e stinson, Nels Cline and butoh dancer Oguri that should see the light of day.

S: For many people, Public Access seems archaic and quaint. Does it still have relevency?

D: It's easy to poke fun at public access but, in a city the size of Long Beach, it becomes an important cornerstone of free speech. In this era of media consolidation, where our local daily paper is run by out of town interests, and we get little coverage on the 'Local' news channels, there needs to be venues that accommodate a wide variety of points of view on our city. It helps build our community when we can really see all that's going on around us in this wildly diverse town.

Also, the community still needs to have access to physical tools, like cameras, for example. PADNET can provide that, and at a fraction of the cost you'd pay to rent one professionally. I mean, an iPhone or GoPro is cool, but a real camera or studio is like having a Hamburg Steinway at your disposal. You don't need it, but it's nice to have, and it makes things go easier. Also, they provide distribution. TV may be getting marginalized, but it's still a viable venue, and free speech should have as many venues as possible!

When I was on the road, I'd always check the local public access TV channel because it was a unique window into the cities I was passing through, and provided a view like nothing else. That's not to say all the content was golden, but that's the point. Good, bad, warts and all.

There are people out there doing good work, searching for beauty and the truth, trying to hold up their candle in the darkness, and there are knuckleheads who think they're going to conquer the world with their TV show, and everything in between. They all need a venue from which to entertain and inform. Hopefully, PADNET can stay the course and be that venue.

Right now, PADNET is available on Charter channel 32, and Verizon channel 41. Portable Universe has been running regularly at 8 PM on Fridays. Streaming and on-demand content, and broadcast schedules, are available at PADNET.TV.

Many episodes of Portable Universe can be found at PortableUniverse.tv.

More information about David can be found at DavidWitham.com.

You can also hear a podcast interview I did with David, and watch a video of him playing two original tunes, recorded way back in 2008.